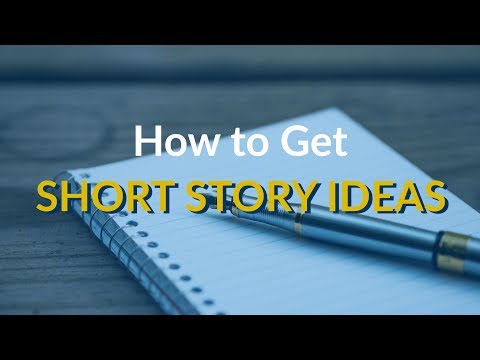 Techniques to come up with short story ideas.

The fun thing about short stories is that there’s such a compact and flexible medium. It’s pretty easy to jump in without much planning. Short stories are pretty much all essentially about change. Really stories in general are about change. No matter where your idea comes from or where it starts what you’re looking for is change either within the character or the readers understanding of the character. Look for a way to add goals, tension, conflict, and antagonistic forces.

The first technique would be to start from a character. A lot of stories start with a character. Often this isn’t a fully fleshed out character, but just a character type. Sometimes this detail starts with someone you observe in real life while people watching, someone you know or it’s just a more general detail or type that you find interesting.

Some examples of a character type would be a teacher or a dog walker. These are character types but they’re not really characters yet. However, if you have one you want to write about you can turn that character type into an idea.

None of these character types lend to stories in themselves, so what you have to do is complicate them, add another element to take this idea from a character type to an original character with a story. Combine this character type with something unexpected to ignite the story and the conflict and find that change you’re looking for maybe your teacher is also a dog walker and accidentally loses the dog. Now they have to scramble before the end of the day when they have to return the dog to their owner. Now you have a specific situation you can work from. You can also use a similar process a setting whether you want to write a story set at the bottom of the ocean, or a medieval castle, or the edge of a volcano.

Setting can be a really fun place to start a story idea. Setting is especially a good place to start if you’re a really visual writer and you tend to work well from imagery or atmosphere. Drop a character into your setting and see where it takes them. You have a character type you want to work with and a setting you want to work with combine them to see how they clash and see what the setting can bring out of the character. Similarly to working from characters, you could also try working from a character relationship. It’s quite common for a short story to explore the essence of a single relationship. The nice thing about this is because with two characters it gives you tons of opportunity for conflict.

Common relationship types you could explore would be friendships, parent-child relationships, romantic relationships, sibling relationships, and even these more familiar relationships we see often in fiction can be really interesting from a new angle. Try to add in some sort of contrasting element to ignite the conflict. Maybe you want to talk about the rival returned friendship of two gardeners who work on opposite sides of a hedge and only communicate by talking through the hedge. They have never actually met.

You could also try working from form. Normally you would create your form to match your story but the fun thing about short stories is that they can really do wacky experimental things and you don’t have to commit to it for the full span of a novel. You could do something really wacky like second-person future tents from the point of view of a light bulb. Instead of having to plan out how this is going work and play out technically for ninety thousand words you can just see where it goes. The puzzle now is creating a story to fit the form you want to work with rather than the other way around. If you have an idea for a form that’s really intriguing to you, it can be a fun way to write.

Finally you could try writing from a prompt if you’re really stuck. Prompts can actually be a great way to start writing. You can use anything as a prompt. I often like using photographs as prompts. I’m a very visual writer and my ideas usually start from some random image. Sometimes it helps if I just seek out the image instead of trying to create one. If you really like music you could use songs as prompts. You can really use anything or you can try using actual writing prompts.